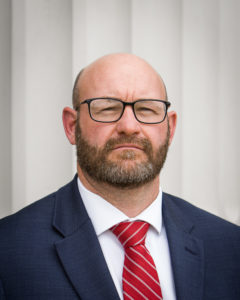 A native of Spanish Fork, Utah, S. Todd Banks is the most recent addition to the elite criminal defense
team at Stowell Crayk.

A graduate of Brigham Young University and the Creighton University School of Law, Todd started his career at a general practice firm in Heber City, Utah. While there, Todd discovered his passion for criminal law covering a monthly public defender day in the Heber City Justice Court. This passion lead him to Northern Nevada where he clerked for the Honorable Jim C. Shirley in the Eleventh Judicial District Court. This experience allowed Todd to be exposed to winning written and oral arguments that are effective in criminal cases just like yours.

Todd then transitioned to the role of Deputy District Attorney at the Pershing County District Attorney’s
Office, eventually becoming the Chief Deputy. He spent seven years prosecuting a wide variety of
criminal cases including major crimes such as Homicide, Sexual Assault, Embezzlement, Drug Trafficking
and other felony cases. Todd became well versed in the prosecution of DUI and Domestic Violence
offenses having successfully prosecuted well over a hundred of these cases in his career. Todd received
training in prosecution of internet sex crimes from the prestigious National Computer Forensic Institute
of the Secret Service in Hoover, Alabama.

Todd also served as the designated State prosecutor over the annual Burning Man festival held annually
in the Black Rock Desert of Nevada. In this role he worked as part of a joint command with the United
States Attorney’s Office overseeing prosecution of State crimes. Additionally, he oversaw the training of
both State and Federal agents in search and seizures related to automobile stops using K-9 units giving
him a unique perspective on search and seizure laws that are critical components of drug interdiction
cases.

Todd’s commitment to the integrity of the justice system and passion for criminal law, coupled with the
internal knowledge of how prosecutors manage cases and Courts render decisions is invaluable. He
brings unique perspectives and creative approaches to the most complex of criminal cases and is a
major asset to our team. Clients will appreciate Todd’s folksy but direct communication style while
navigating the most serious of matters.

Todd understands that few things in this life are as daunting as being subject to criminal prosecution.
He also knows how critical it is to have experienced representation in your corner to fight for you!
Licensed in Utah and Nevada, Todd is prepared to tackle your criminal case anywhere in the Great Basin.